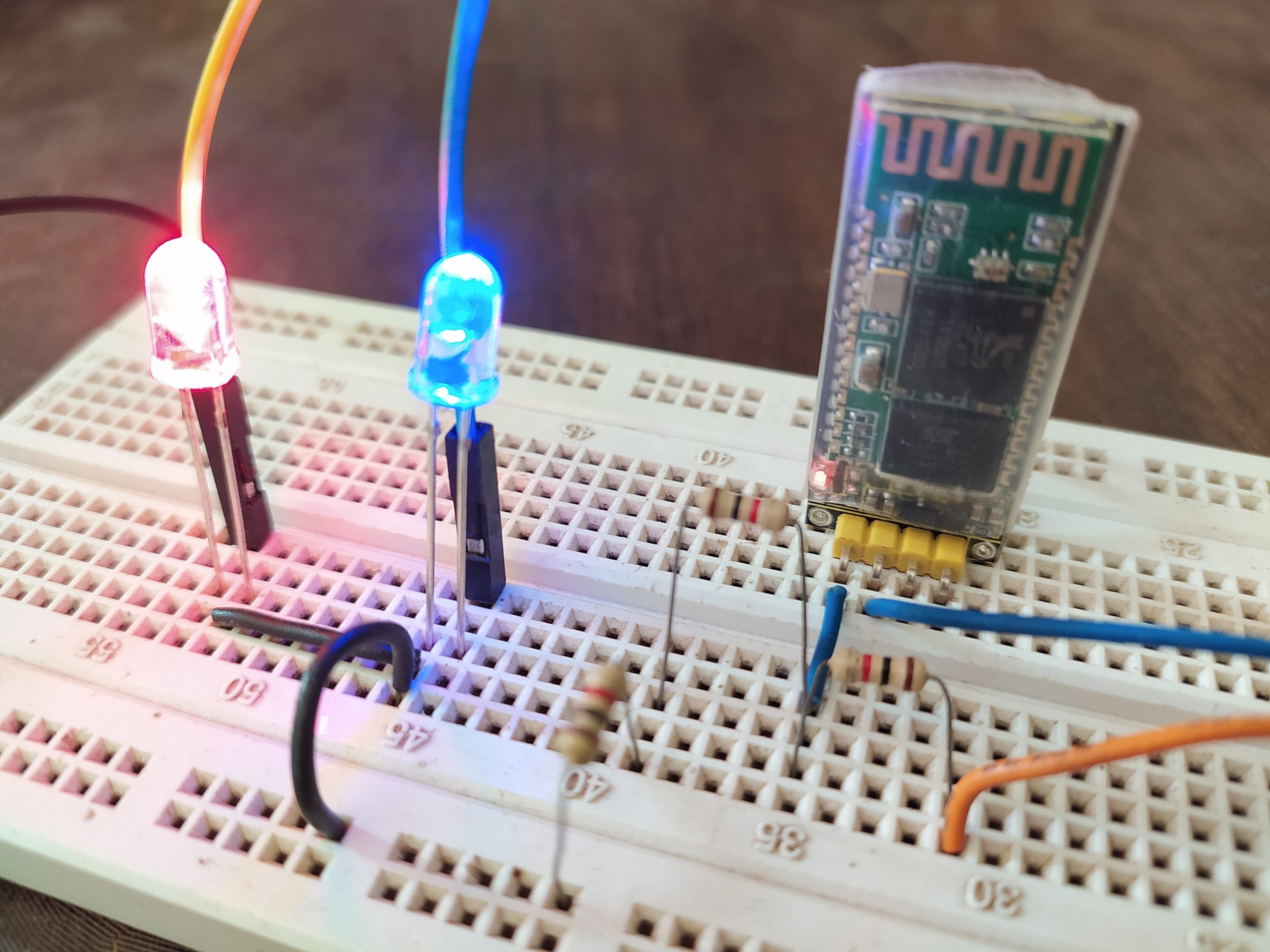 In previous tutorial we learned how to use old IR remotes to control a robot car. If you haven’t checked that article, here is a link. But IR isn’t the only way to control devices. There are other means of wireless communication like RF, WiFi and Bluetooth.
In this article we will learn how to use Bluetooth to control LEDs with the help of Arduino. So without wasting any more time, let’s get started.

Disclaimer: This blog contains Amazon and Banggood Affiliate links. Buying product from those links helps us run this blog without any extra charges on you.

The connections are simple,

To make a voltage divider, all we need are two resistors (1K and 2.2K). Connect them as shown in the image above and you are good to go.

Also I have connected 2 LEDs to Pin 7 & Pin 8 of arduino which we will control using Smartphone.

Copy the code from below and open it in IDE.

The code is well commented so I don’t think it is necessary to explain it again. You can save this as “.ino” fine and upload to the Arduino Nano.

NOTE: Before you hit upload, Make sure you remove the Bluetooth Module. The TX and RX pins should not be connected to any other device while uploading codes or you will get errors.

Now that we have a circuit ready and code uploaded, we just need to get an app which will help us toggle the LEDs on and off. The app we will use for this purpose is Arduino Remote LITE app which is available on Playstore.

Once installed the app you will, Open it and allow it the permission to turn on Bluetooth.
Now power the Arduino and the Bluetooth module should start blinking.
Next check the App for Bluetooth devices and connect to the HC-05/HC-06 from the list.
It will take a second or two to connect, it might ask for password. If it does just try ‘0000’ or ‘1234’.
Once the Bluetooth is connected to HC-06, it will stop blinking.

Now click on the third tab from the top and you will see a list of relay switches. We will use the first two of these to turn the LEDs on/off.

Here you the first two switches will turn the LEDs on and off.

The Bluetooth Module and Arduino communicate Serially Through RX and TX pins.
When the switch is toggled it sends a command serially to Arduino via Bluetooth. This command is then saved in a variable and verified in an if-else statement. If the command matches, action is takes. Eg: LED turns on.

And that’s all for this article, it was a basic tutorial for beginners. Now you can get a Bluetooth module and start experimenting. In future articles we will use this knowledge to build cool projects. So stay tuned.